It is an original apartment building, built in 1929, by developer S.H. Woodruff.  The owners plan to remodel the four-plex building while still maintaining the historical integrity of each unit.

placed on the city’s Historic Resource Register. The vote also granted participation in the Mills Act Program. Originally the Blue Lantern Fountain Café, it most recently is recognized as the former Bella Bazaar retail building.

The Blue Lantern Gazebo has been placed as a historic structure on Dana Point’s Historic Resource Register. 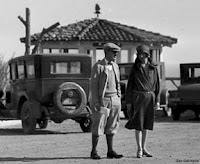 Built c. 1925-1927, this historic landmark represents one of the first two developments in Dana Point, advertising as early as 1924.  Doris Walker described the Blue Lantern Gazebo as built by the San Juan Point Corporation, a financial syndicate of Laguna Beach realtors, before S. H. Woodruff’s syndicate bought the failed development in 1926.  Recent research indicates the Gazebo may have been built during the transition to the Woodruff era, about the same time as the Blue Lantern Fountain Lunch building.

A Significant Historic Resource designation was received for the Arches, the preserved 1930 architectural ruins of the Dana Point Inn, Woodruff’s vision of a grand hotel situated on the bluff above the harbor.  In addition, the adjacent Bluff Top Trail located at Violet Lantern and El Camino Capistrano also received the same designation. The remnants of stone retainer walls and walkways, viewed from the Bluff Top Trail, still remain from the Scenic Walkway, or beach access trail, that was advertised in 1924 when built by the San Juan Point Corporation, the first development to actually break ground in the new Dana Point community 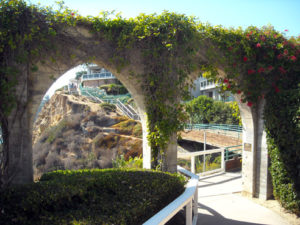 Left, from what would have been the hotel’s interior, a view of the remnants of the Dana Point Inn Arches with the Bluff Top Trail seen directly behind. Below, the Dana Point Inn under construction in the 1930s.  The arches can be seen at the far right. 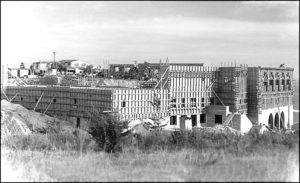 According to Doris Walker, these structures were built near the original site of the Scenic Inn reportedly using rocks from the ruins of the original facility.

The Scenic Inn was famously advertised in real estate ads by the San Juan Point Corporation.  Located on the beach at the base of the Dana Point bluffs, it was the hospitable site where prospective lot buyers were served lunch and encouraged to invest.