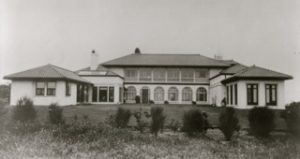 Considered Dana Point’s oldest residence, the Dolph House was built in 1914 before the Panama-California Exposition was held in San Diego the following year and three years before the U.S. entered World War I.  Miss Blanch Dolph commissioned the Los Angeles architectural firm of Walker and Vawter to design her permanent residence.  While the home has been described as Mediterranean with Italian influence, it has also been described as Mission style.  However, the low-pitched roofs seem to have a Prairie influence with wide eave overhangs and lower horizontal lines in contrast to the Mission Revival homes such as the nearby Forster Mansion (c.1910). It is remarkable that the Dolph House was built before Spanish Colonial Revival architecture became the 1920s and 1930s California style of post World War I. Yet the home’s exterior hints at the future of romantic Mediterranean villages to be built locally by Ole Hanson, Sidney H. Woodruff and Ned Doheny.

The Dolph House is located at 1 Capistrano-by-the-Sea before entering the Bal Harbour gated community of  43 luxury homes built on land acquired after the Capistrano-by-the-Sea  hospital closed in the 1990s.  Blanche Dolph’s travels may have inspired the Mediterranean influence of her home. The Dana Point Historical Society’s original copy of The 1921 History of Orange County California with Biographical Sketches by Samuel Armour states that “ . . . she had traveled extensively throughout the United States and Europe as well as the Orient, and her experienced eye enabled her to pick the site of her home on account of its beautiful view and natural beauty, commanding … a view of the broad Pacific as well as the beautiful San Juan Valley …”

Blanche is also described as an accomplished musician who attended the University of Lewisburg in central Pennsylvania, now Bucknell University, and studied the violin, cornet and piano. In 1889, the Los Angeles Times reported that Blanche Dolph performed at a Valentine Day’s concert at the Los Angeles Armory as a solo cornetist with Kate Fleming as vocalist and the Seventh Regiment Band.  Because of her devotion to music and the arts, Blanche had an elaborate music room built on the first floor of her home with a built-in ceiling film projector.

Blanche Dolph was the epitome of a liberated and educated women by today’s standards. Born in Scranton, Pennsylvania, Blanche used her share of inherited family anthracite coal wealth to study, travel,  invest and do charitable work.  In 1886 she would see the neighborhood of  San Juan–by-the-Sea on her first trip to California and would cross the United States 60 times by 1921, twice across the Isthmus of Panama before the canal was built!  In 1917 Blanche motored with her friend Lucilla McGaughey across America. Lucilla was the Assistant Pastor of Blanche’s Presbyterian Church in Scranton at the turn of the century when Blanche invited her along on a trip to missions in China and India.  Lucilla would later become Blanche’s secretary and companion for  25 years. The 1920 U.S. Census lists a hired man, a maid and a secretary at Blanche’s residence.  Blanche’s elder sister, Miss Florence Dolph, resided at 2021 Ocean View Avenue in Los Angeles.  While they had separate residences and lives, the sisters had some common investments and would donate two acres of Aliso Canyon land in 1935 to the Girl Scout Council  for the Elizabeth Dolph Girl Scout Camp in memory of their mother Elizabeth Wadhams Dolph. 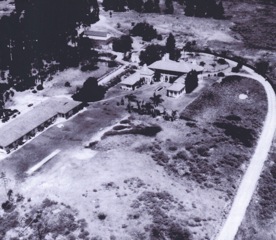 Blanche named her home “The Dolphin” and was determined to change her barren windswept hill into a lawn, flowerbeds and a home garden despite discouraging advice from her neighbors in the rich lowlands of San Juan Valley. An article in the Los Angeles Times dated October 19, 1924, had a lengthy account headlined “Bare Hilltop Acres Are Made to Bloom” with two photos of Blanche in her bountiful garden.  Blanche had irrigated her lawn and plants with water gathered in a large concrete cistern sunk into the ground to catch the run-off water from her tile roof.  However, to plant a garden that included a family orchard, grape vines, blackberry vines, guava and more, she needed a great deal of water in the event of a drought.  When available, additional water was pumped from a the edge of the creek through several hundred feet of pipeline to the top of the mesa.  One night, the hired man forgot to turn the water off and the reservoir went dry.  The result  was a bumper crop of four grape varieties, loaded fig trees — there were lemons, oranges, peaches, plums, pears and even apples and olives.  Blanche also raised chickens and even had a cow, all on her hilltop 10 acres, when she was 75 years young!

Blanche also owned ranch land in San Juan Capistrano and had other investments, which appear in local historic records and newspapers.  Blanche was said to have a pretty home at Arch Beach and is recorded in the Laguna Beach Historic Resources Element as buying the homestead of William Egan in 1927 in partnership with  Dwight Whiting, who named the area Three Arches.  (A post office opened in December 1933 under the name Three Arches but was changed to South Laguna, by popular vote, a year later.)

Blanche also had an earlier partnership with Horace Pullen in the Coast Royal area.  Pullen decided to subdivide and place the property on the market while Blanche was in Europe.  The Los Angeles newspapers branded it a swindle in 1925 when Blanche filed suit to stop the project and it died as a result.  Coast Royal was the first development in South Laguna and was later acquired by Guy and Joe Skidmore, a local real estate development team.

When Blanche Dolph died in 1936, at 87 years of age, the Los Angeles Times printed a story entitled, “Huge Estate Fight Rages, Santa Ana Courts Will Hear Case Involving Missionary’s $800,000 Holdings.”  It seems Florence Dolph, the 89-year-old sister living in Los Angeles, charged that Miss McGaughey had insinuated herself into the life of the deceased and “by nefarious designs” turned Blanche against her own family.  Florence was left only a rug and a picture, described as the deceased’s two most prized possessions, but nothing more. The article goes on to say, “All the residue of the estate goes to Miss McGaughey who insists that, if the court honors the will, she will carry out the instructions of ‘my Miss Dolph’ to the letter.“ Lucilla McGaughey died at The Dolphin in 1945 at 80 years of age, ending the Dolph era of the home. It remains for us to learn what it was that Blanche Dolph wanted done with her money and if her wishes were carried out.

Dr. Harold E. Day acquired the Dolph Estate in 1953, expanding it to 20 acres for the Capistrano-by-the-Sea Hospital and Clinic.  It was the Hospital’s alterations to the Dolph  House and vandalism when it closed in 1996 that would require extensive restoration. The city of Dana Point required the home be retained and rehabilitated as a private residence during the development of the Bal Harbor community. The DPHS museum will soon have the original working drawings of the home on display along with our current Dolph House exhibit. See more about this fascinating piece of our history named “The Dolphin” on YouTube:

And look for Parts 2 and 3 of our narrative about The Dolph house in future News Droghers.