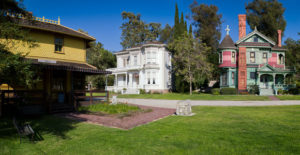 Heritage Square Museum (http://heritagesquare.org/about) transports visitors to the end of the 19th century, when California was a fledgling state and the former cow town El Pueblo de Los Angeles began shaping itself into the metropolis it is today. The museum is not housed in one building but is actually eight different historic structures constructed during the Victorian Era.  The buildings were saved from demolition and are now used to educate the public about the everyday lives of Southern Californians dating from late 19th Century into the early decades of the 20th Century. From the simplicity of the Longfellow-Hastings Octagon House to the opulence of the William Perry Mansion, the museum provides a unique look at the lifestyles of the people who contributed so much to the development of modern Los Angeles. 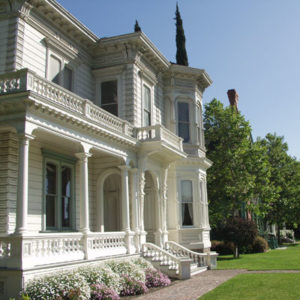 The Grier Musser Museum is located in an old Queen Anne house built in 1898 not far from downtown Los Angeles in a residential neighborhood. Unlike most museums in old homes, this one is lived in by the curators, Susan and Rey Tejada. A tour here is like going back in time through a curio shop with an eclectic collection of decorative items including ceramics and paintings as well as a number of once- functional items from decades gone by including an old black & white TV (run on cathode ray tubes), a wind-up record player, and an ancient typewriter.

Your day begins by meeting at Strands parking lot at 9:45 am sharp where you will board the bus to Heritage Square.  A private tour of the Heritage Square building is followed by a late lunch (1:30 pm) on your own.  You may pack a lunch to eat on the bus or make a reservation with our group that will be dining at Clifton’s Cafeteria in Los Angeles, a three-level restaurant and bar: http://www.cliftonsla.com/.

Your next stop is the Grier Musser Museum to view the Victorian house filled with curiosities and antiques. Afterward, the bus will be boarded at about 4 pm and return to Strands parking lot at approximately 5:15 pm.

If you wish to attend please CLICK HERE Reservation Form to download and complete the reservation form. Return it, with your payment, to the Dana Point Historical Society, PO Box 554, Dana Point, CA 92629 no later than TUESDAY, NOVEMBER 1st.  You may also drop off the form and your payment at our museum during regular hours, Tuesdays, Thursdays and Saturdays 1-3 pm.

Reservations are $45 per member and $50 for non-members payable by check, money order or cash. Space is limited to 55 people.