nstalled in the City.  Restoration of the cast iron lantern post includes removing 90 years of rust and deterioration since the lanterns were first installed, circa 1927-1930. The City’s contractor, Dynalectric (workers pictured right with Dana Point Public Works Director Matt Sinacori), was able to uncover the original anchor bolts and nuts so that the entire post and base plate with hardware were saved (picture left). 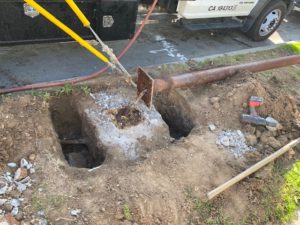 According to the 1997 Historic Architectural Resources Inventory by Aegis, prepared for the City, “Streetlights in the shape of ships’ lanterns were installed throughout the town with underground wiring, revolutionary for the time.  During the depression and war years most of the 18-inch copper lanterns were stolen, scrapped or fell apart.  Some of the original lanterns (and posts) were salvaged.  In 1989, 15 were refurbished, rewired, and installed on La Plaza, the historic town square.”

Original Dana Point Lanterns have also been preserved by residents and eight appear in the gardens of homes in the Lantern Village. The City also installed historic lantern replicas as part of the Lantern District Project downtown from 2014 to 2015.  They are located at Pacific Coast Highway (PCH)/Blue Lantern, PCH/Ruby Lantern, and on Del Prado at the Streets of Ruby, Amber, Violet and Old Golden Lantern.

For more information about historic lanterns as well as other historic features in Dana Point, contact us at (949) 248-8121 or email museum@danapointhistorical.org.