Orange County Supervisor Lisa Bartlett and staff, together with a committee representing civic, business and nonprofit organizations, kept a 50-year promise on Monday, August 29, 2016.  The promise, under the auspices of Supervisor Alton E. Allen, was made to those who attended the 1966 Harbor Rock Placing Ceremony, pageant and dinner.  A “Complimentary Ticket” to a Bar-B-Q Dinner for the Dana Point Harbor Time Capsule Opening Ceremony on August 29, 2016, was issued by the Orange County Coast Association and was to be valid when presented by the original holder.  This year, over three dozen original 1966 tickets were presented. Miss Dana Point 1966, Nancy Buenger McNaughton, had her ticket pasted in her scrapbook, but she attended as the guest of an event sponsor. 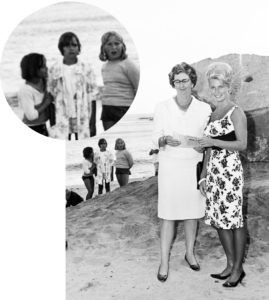 received before and after the 2016 Time Capsule Opening Celebration:  Regarding the photos taken during the time capsule ceremony in 1966. There are a few photos of Miss Dana Point [as well as other local pageant winners] accepting items for the time capsule. In the background of those pictures it was fun to see my sister and I [Cynthia is the center child] with neighborhood friends standing in the background. I remember our friend’s mother, being a photographer, telling us to stand there so we would be in the pictures. I received my barbecu
e ticket that day and kept it all those years. I was fortunate to make it to the opening ceremony in August along with my long held ticket. It was a fun day and I appreciate you all making it special for us who thought 2016 was so just too far into the future. Boy, how time flew by! (Pictured is Miss Laguna Beach, Marsha Bennet, right, with a representative from Laguna Federal Savings).

The Dana Point Historical Society is indebted to the civic and service groups that directed and produced the 1966 Time Capsule Ceremony because our organization didn’t exist until 1987.  We did have some acquired items in our files that we shared with Chris Jepsen of the Orange County Archives, who curated the 2016 Time Capsule Exhibit, currently on display in our museum.  Our docents had been receiving phone calls since 2014 from people who had their 1966 Bar-B-Q tickets ready to use.  Some of our founding members attended the 1966 ceremony, including Doris Walker, Mel & Helen Pierce and Don Hansen.  Because Doris described the occasion vividly in her book Home Port for Romance, we already knew the lyrics to “Dana’s Voyage,” sung in 1966 and reprised for this year’s event, and we knew the Rock Placing Ceremony was sponsored by the Orange County Harbor District, the United States Army Corps of Engineers and the California Division of Beaches and Parks.

Early in the spring of 2016, Supervisor Bartlett’s office invited Dana Point Harbor, OC Parks, the Ocean Institute and many other partners and sponsors to participate in the celebration.  Our Society accepted the invitation to be the lead nonprofit sponsor of this year’s time capsule celebration in Doris’ memory — we knew she would have wanted to be involved and was with us in spirit. Her books also include great photos that bring the 1966 event to life.  This year, we were joined by many people who attended the 1966 time capsule event, including two of the high school queens who officiated, Miss Dana Point, Nancy Buenger McNaughton, and Miss San Clemente, Valerie Zagwolski Shinkle.  We were also joined by alumni from the Boy Scouts who had directed traffic and assisted with flag raising. Folks contacted our Society who were in the pageant photos taken at Doheny Beach, where Richard Henry Dana’s arrival on the Pilgrim was re-enacted 50 years ago.  Guy Swentek, now a teacher in Santa Ana, emailed us that he portrayed a Native American in the pageant and his dad had played the part of Father Serra.

Elizabeth Bamattre contacted many of the groups who contributed to the 1966 Time Capsule and many of their members made special arrangements to attend. Members from the American Association of University Women attended with their co-founder, Lyn Harris Hicks.  The American Gold Star Mothers attended as our guests, who included Sue Pollard, the National First Vice President and Proud mother of Spec. Justin W. Pollard, Iraq/12.30.2003. Two Chapters of the Daughters of the American Revolution were represented, the American Legion and VFW were contributors to the time capsule and Fred Hunn, son of the VFW Post 3801 Commander, attended with his original tickets that he helped distribute in 1966.  Doris was represented by her sons, Brent and Blair Walker, and all her friends who knew her and all of us who read her books.

Les Remmers designed the Harbor logo on those original BBQ tickets, the program and the capsule’s bronze plaque. The bronze plaque sealed the capsule on October 1, 1968, marking the completion of the breakwaters, the first phase of the harbor’s construction.  Photos of the event included Harbor District Director Ken Sampson, County Harbor Engineer Jim Ballinger and Ernie Silberberger, one of the three brothers of Silberberger Constructors who built the breakwater.  Twenty-six members of the Silberberger family came from the Carlsbad area along with Ernie to attend the 2016 celebration!

When I spoke at the ceremony in August, I asked those who attended the 1966 event to stand and then asked others to join them if they were related to someone who was there in 1966 — hundreds were standing!  It was a harbor reunion!

The first two pages of Time Capsule 50-Year Celebration souvenir program contain a list of all the 1966 contributors and the items each selected for the time capsule.  OC Parks estimated attendance at 1,500 people, many of whom lined up for over two hours to view the time capsule exhibit in two of the picnic pavilions.  More than 600 people chose to enjoy the chicken picnic dinner provided by the harbor’s restaurants.  Many had their photos taken at the newly relocated Time Capsule Rock at Baby Beach.

Among those photographed near the rock were Jay Elder and his friends, who were just 13 and 14 years old in 1966 when his mother, Frani Elder, put their complimentary dinner tickets in her purse for safe keeping.  Jay had forgotten all about it until his mother reminded him and gave him a file with five tickets, an original program, newspaper clippings and other memorabilia. Jay’s mother died July 7, but Jay came from Washougal, Washington, to meet his friends at the Time Capsule Celebration.  After the program, he found me in the crowd and gave the Historical Society the contents of the file in his mother’s memory. Then Jay returned to Don Hansen and his buddies, all of whom had worked for Don Hansen at the San Clemente Pier as teenagers—another reunion. The Elder family items and story are in the museum exhibit.

The Time Capsule Opening Celebration was really a reunion for all the people who were present for the harbor’s beginning, to remember those who made the harbor a reality for the enjoyment of so many as well as for those who surfed Dana Cove and wistfully recalled the loss of a legendary wave known as Killer Dana.