One of the Dana Point Historical Society’s Own Members, Mitchell “Mitch” Higginbotham, enters history and is jointly awarded the Congressional Gold Medal, one of the nation’s highest honors, by President Bush and Congress on March 29, 2007.

Mitch Higginbotham is pictured 4th from the right

WASHINGTON – President Bush and Congress awarded the Tuskegee Airmen one of the nation’s highest honors Thursday for fighting to defend their country even as they faced bigotry at home.

“For all the unreturned salutes and unforgivable indignities … I salute you for your service to the United States of America,” Bush told the legendary black aviators, standing in salute as some 300 of them stood to return the gesture.

At a ceremony in the sun-filled Capitol Rotunda, Bush then joined congressional leaders and other dignitaries in awarding the veterans – most of them in their 80s – the Congressional Gold Medal.

“We are so overjoyed,” said Ret. Capt. Roscoe Brown Jr., after he and five other airmen accepted the medal on behalf of the group. “We are so proud today, and I think America is proud today.”

Nearly 1,000 fighter pilots trained as a segregated Army Air Corps unit at the Tuskegee, Ala., air base. President Franklin D. Roosevelt had overruled his top generals and ordered that such a program be created.

Even after the black airmen were admitted, many commanders continued to believe they didn’t have the intelligence, courage and patriotism to do what was being asked of them.

Not allowed to practice or fight with their white counterparts, the Tuskegee Airmen distinguished themselves by painting the tails of their airplanes red, which led to them becoming known as the “Red Tails.” 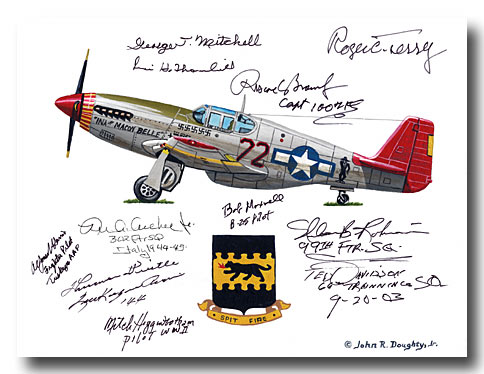 Hundreds saw combat throughout Europe, the Mediterranean and North Africa, escorting bomber aircraft on missions and protecting them from the enemy. Dozens died in the fighting; others were held prisoners of war.

“You caused America to look in the mirror of its soul and you showed America that there was nothing a black person couldn’t do,” said Colin Powell, a retired Army general and Bush’s former secretary of state. Powell, who is black, thanked the airmen for paving the way for his career.

Charles “A-Train” Dryden, 86, a retired lieutenant colonel from Atlanta, expressed mixed feelings that the honor came so long after the war and that many of his colleagues had died without knowing that Americans appreciated their service.

Just a couple of days ago, he said, a fellow pilot was hospitalized in Atlanta and couldn’t attend the ceremony.

“So many of the guys have passed on,” he said.

Dryden recalled his pride in returning from Africa and Europe after serving in Tuskegee’s original 99th Fighter Squadron, only to be stationed in Walterboro, S.C., where he saw German prisoners of war get privileges in theaters and cafeterias that were denied to black soldiers.

“That was the low point of my career,” said Dryden, who uses a wheelchair.

Thursday’s medal has helped convince him that the country recognizes the airmen’s contributions.

“It’s really something,” he said at a breakfast before the ceremony.

Congress has awarded gold medals to more than 300 individuals and groups since giving the first one to George Washington in 1776. Originally, they went only to military leaders, but Congress broadened the scope to include authors, entertainers, notables in science and medicine, athletes, humanitarians, public servants and foreign officials.