The unique character of Palm Springs was certainly evident at the 34th Annual California Preservation Conference this past April. Much of the first day incorporated culturally significant buildings representing the past and present of Palm Springs as the center of an internationally famous resort area.

In fact, Palm Springs is an excellent example of the theme of the conference, “The Culture of Leisure–Rethinking the California Dream”. The City boasts many cultural and historic treasures that illustrate its history such as the 1920s-1940s homes of movie stars, The El Mirador Hotel Tower, and the modernist buildings of the 1960s to the present. A sense of community pride is evident in the weekly Thursday night Villagefest street fair as well as in the arts festivals featured throughout the year.

The second day began with the Plenary Session’s featured speaker Donovan Rypkema, principal of PlaceEconomics, a Washington D. C., real estate and economic development firm specializing in historic structures. He is also an instructor of a class on the Economics of Preservation at the University of Pennsylvania. Mr. Rypkema spoke on the advantages and pitfalls of historic preservation in the midst of this economic slump and suggested that conservation is part of our way out of this financial crisis. He emphasized the cultural reuse of buildings as a part of sustainability as well as historical preservation.

He stated that it is green and beneficial to our environment to maintain buildings that have already been built rather than to tear them down and construct buildings created from man-made materials such as plastic, steel, and vinyl, which consume more energy and produce environmental impacts that brick, plaster or concrete, and timber did not.

Mr. Rypkema spoke on numerous current trends such as the acceptance of density, mass transportation, and more multi-generational households. Risks to the environment included taking advantage of neighborhoods by building “McMansions” or “structures on steroids” that are a threat to historic neighborhoods. The push for density, he said, is costly to historic homes as is the lack of tools offered by local government for neighborhood improvement. Mr. Rypkema emphasized the need for business, realtors, environmentalists, and transportation designers to work together. It is vital, he added, to take responsibility for our economic, cultural, and social environment.

The International Preservation Luncheon was held at Spencer’s Bougainvillea Room at the Tennis Club. The topic was “Californians Respond to the Modern Movement” with comments by Dr. Raymond Neutra, an advocate of preserving mid-century contemporary historic resources. Keith and I were fortunate to sit at the same table with MaryAnn Bonino, Curator of the Doheny Mansion and College Professor-at-large Emeritus at Mount St. Mary’s College in Los Angeles. Ms. Bonino expressed an interest in bringing the Chester Place docents to Dana Point to visit the remaining Doheny buildings in Capistrano Beach. I later purchased The Doheny Mansion: A Biography of a Home recently authored by Professor Bonino.

Preserving Local Character: It is More than a Feeling was the title of the educational track whose sessions explored the broad spectrum of methods to sustain local character. The concept of tourism and historic character was addressed as it applied to the Coachella Valley. The challenge for conference participants, of course, is to apply the concepts to our own communities. Naturally, I thought of Dana Point as a beautiful coastal community known for its attractive harbor. Orange County and the Ocean Institute have emphasized the history of the harbor with the Tall Ships Festival and a statue of R. H. Dana. 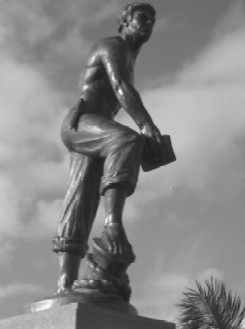 But what historic resources do we have that establish the character of the City of Dana Point and its relationship with the harbor that could enhance the economy of our community? How do we convey our historic memories to our citizens and visitors? Historic resources or districts encourage tourists to stay longer and spend more money while visiting. Such resources create in visitors a desire to return.

Sustainable tourism strategies include buildings, landscapes, and roads that give a sense of our city’s place in history and identify the unique character of our community, contributing to its attraction as a unique tourist destination. Many businesses can be located anywhere, and what does Dana Point offer to attract knowledge-based businesses to our community?

Richard Henry Dana described Dana Point’s early history in his account of Capistrano Bay in Two Years Before the Mast. Two early 20th Century developers in what is now Dana Point were exceptional women, Blanche Dolph and Anna Walters. How do we tell their stories? Do we know what they accomplished?

Sidney H. Woodruff developed Dana Point and advertised it as a planned community and resort destination “From Hollywood to the Sea”. His legacy includes the unique ship-lantern-style streetlights, the ruins of hotel arches along the bluff, and the Spanish Colonial Revival buildings scattered along Pacific Coast Highway and Del Prado.

The City Council has adopted the Town Center Plan that recommends the restoration and preservation of the historic buildings and structures in Town Center. What are the next steps in preserving the local character of Woodruff’s Dana Point? How do we relate the parallel development story of Capistrano Beach and the generous gift of Doheny State Beach?

Those were the thoughts buzzing in my head as I went to the next session on “Multiple Property Submission and the National Register of Historic Places”, a topic for another time.